Welcome to my book stop on the #RRBC blog party tour here in sunny (and sometimes foggy!) Santa Cruz, CA.

I will be giving away prizes of a $20 Amazon Gift Card to two lucky winners. All you have to do to be entered in the contest is leave a comment at the end of this blog. And besides, I’d love to hear from you!

I write for kids and teens and currently have four books published, all award winners! Please take a look below at book blurbs, links to trailers, and other information.

Thanks again for stopping by! And please check out these other amazing RRBC authors’ blog party stops.

In 1775 New Spain, on a journey  from Mexico to California, 15-year-old Fernanda Marquina, half Spanish and half Pima Indian, will discover not only romance, but truths that will change the way she sees her ancestry, her family, and herself.

Fernanda is interviewed on the History Imagined blog!

AWARDS: Gold Medal and Seal of Approval from Literary Classics; RONE (Reward of Novel Excellence) Honorable Mention in the Young Adult category; Books and Author 2015 Book of the Year for Teens/Historical/Romance category. 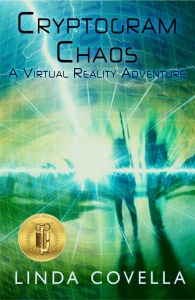 What if you were 8, or 11, or 14, and you could race cars at 150 mph, bungee jump, fly, eat all the ice cream and candy you wanted, or become powerful avatars such as Robobug, Kulshedra the dragon, and Altai, the gryphon avatar?

All this and more is possible in the ultimate virtual reality game The Cryptogram Connection created by 14-year-old computer whiz Cody Reynolds and his two classmates, Nicole Nash and Kerry McCorkle. To advance to different levels in the game, players must solve cryptograms, or secret codes. (Readers also get to solve the cryptograms.)

The game becomes every kids’ virtual dream, and Cody, Nicole, and Kerry, besides becoming national celebrities, make more money than they ever imagined. But The Cryptogram Connection turns into “cryptogram chaos” when an evil presence inhabits Zazar, the laser avatar and the most powerful, and takes control of the game. It’s up to the three partners to enter the game and fight Zazar to save the gamers from virtual—and real—disaster.

Read the REVIEWS.   Watch the TRAILER.   Read an EXCERPT.

AWARDS: Gold Medal and Seal of Approval from Literary Classics. 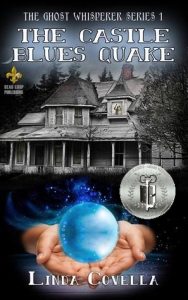 Book One in The Ghost Whisperer Series

A lonely girl, a desperate ghost boy, a saw-playing street musician, a psychic, and an oddball library page: friendships are formed that will change the lives of all—here and in the hereafter.

12-year-old Pepper’s new friend, Corey, is a ghost, but she doesn’t know it. After leaving her best friend behind in New York City, she and her family move to Santa Cruz, CA, into a run-down Victorian. Pepper discovers Corey hiding out in the backyard shed. He’s waiting to make contact with his grandfather, Boppie, before he crosses over. He tells Pepper he needs to find Boppie before Social Services sends him to a foster home. Pepper agrees to help.

Others help her on her quest: new classmate Ally Cressman, who dresses in an odd-ball, non-mall style; Sawtooth Sam, the mysterious saw-playing street musician; harmonica player Walker Blue; and Madame Mchumba, who performs her psychic readings at the Santa Cruz Beach Boardwalk amusement park. Time travel, earthquakes, haunted house rides, poltergeist activity, and crystal ball readings propel her toward the shocking end of her search, and an understanding of what it means to be a true friend.

AWARDS: Silver Medal and Seal of Approval from Literary Classics.

In the rainy forest of the Santa Cruz Mountains, in the small town of Brookdale, in the long-uninhabited Pebble Brook Lodge…exist four ghosts who stand in the way of Pepper’s search for the truth.

In this sequel to the award-winning book The Castle Blues Quake, Pepper Connelly’s chef parents take Pepper and her little sister Sage on another restaurant venture to renovate the Pebble Brook Lodge.

One of the unique features of the lodge is a creek running through the large dining room. Pepper learns that, in 1966, a thirteen-year-old girl, Karen Hullett, drowned in the creek. Her ten-year-old brother, Willie, was accused of causing her death, and his mother and townspeople still believe he was responsible. Willie, now middle-aged, lives with his mother in a cabin in the woods. Mrs. Hullett has never forgiven Willie for her beloved daughter’s death.

As Pepper secretly becomes acquainted with Willie and sees his gentle nature and his beautiful life-like carvings, she’s convinced he was not responsible for his sister’s death.

With the help of her friend Ally Cressman, Pepper sets out to prove Willie’s innocence. With Ouija board sessions, hauntings by four different ghosts, and time travel to 1939 and 1966, Pepper discovers there’s more to Karen’s death than she—or anyone in Brookdale—would have ever guessed.

AWARDS: Gold Medal and Seal of Approval from Literary Classics.

A Blog About Writing and Tomfoolery

Musings from the Yellow Kitchen

One Stop for All Your Publicity Needs

Looking For The Light