The Ghosts of Pebble Brook Lodge 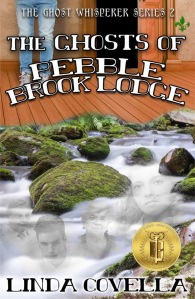 THE GHOSTS OF PEBBLE BROOK LODGE, BOOK TWO in the GHOST WHISPERER SERIES!  (sequel to the award-winning The Castle Blues Quake)

From the CLC review: The Ghosts of Pebble Brook Lodge is an entertaining ghost story that will keep readers in suspense from the first page to the last. Author Linda Covella creates a great story that is well written and full of suspense.  Young readers will delight in this book.

Synopsis: With only two weeks to prove her friend Willie’s innocence, Ghost Whisperer Pepper Connelly discovers the key lies with four ghosts who have their own haunting agendas.

Pepper Connelly, now thirteen, is on the move again, this time from the beaches of Santa Cruz to the rainy forest of the Santa Cruz Mountains. Her chef parents have taken Pepper and her little sister Sage on another restaurant venture to renovate the long-uninhabited Pebble Brook Lodge in the small town of Brookdale.

Uninhabited, that is, except for a series of ghosts each with his or her own haunting agenda, as Pepper slowly discovers.

One of the unique features of the lodge is a creek running through the large dining room. Pepper learns that, in 1966, a thirteen-year-old girl, Karen, drowned in the creek. Her ten-year-old brother, Willie Hullett, was accused of killing her. Willie, now middle-aged, lives with his mother in a cabin in the woods. Mrs. Hullett has never forgiven Willie for killing her beloved daughter.

As Pepper secretly becomes acquainted with Willie and sees his gentle nature and his beautiful life-like carvings, she’s convinced he did not kill his sister.

With the help of her friend Ally Cressman, Pepper sets out to prove Willie’s innocence. With Ouija board sessions, hauntings by four different ghosts, and time travel to 1939 and 1966, Pepper discovers there’s more to Karen’s death than she—or anyone in Brookdale—would have ever guessed.

Read below about the Brookdale Lodge, the real lodge with its history of ghost sightings that inspired me to write The Ghosts of Pebble Brook Lodge. I took the pictures below when I visited the lodge while researching my book.

The Brookdale Lodge is located in the Santa Cruz mountains.  It was built in 1890 at the site of a lumber mill. The lodge is known for its unique feature: a creek running through the middle of the dining room. In the early days of the lodge, guests included President Herbert Hoover and movie stars such as Mae West and Marilyn Monroe.

In the 1940s, gangsters used the lodge for their shady dealings, and at this time secret passageways were built that led to hidden rooms. Whispers about bodies buried beneath the floorboards placed a shadow over the glamorous reputation of the lodge.

Another incident added to the mystery surrounding the lodge. In the 1950s, a six-year-old girl fell into the creek, struck her head on a rock, and drowned. Her ghost, and others, have been sighted at the lodge. Read more about the Brookdale Lodge ghosts on the Ghost Hauntings website.

The dining room with the creek.

In The Ghosts of Pebble Brook Lodge, Pepper finds this doorway that leads to a mysterious “room” where the creek exits the lodge. 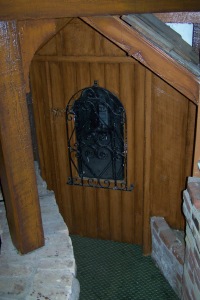 In this room, Pepper crosses the creek and finds clues to the mystery of the ghosts that haunt the lodge.

The Brookdale Lodge has these odd paintings on the walls, I think of celebrities who visited the lodge in the past. I believe the one on the left is W.C. Fields and on the right, Humphrey Bogart. In The Ghosts of Pebble Brook Lodge, different paintings are on the walls, and are part of the mystery Pepper is trying to unravel. 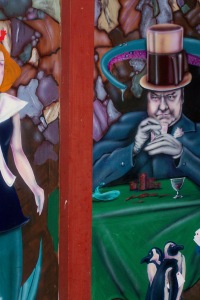 Pepper finds the final clue in this spooky basement.

3 Responses to The Ghosts of Pebble Brook Lodge