The Power of a Dream 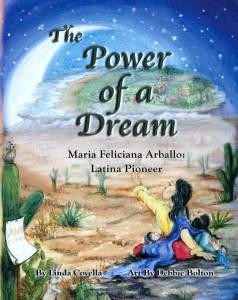 Exciting News! The Power of a Dream has won an award for FINALIST from International Book Awards 2019 in the Children’s Picture Book: Hardcover Non-Fiction category!

THE POWER OF A DREAM: MARIA FELICIANA ARBALLO, LATINA PIONEER is a narrative nonfiction picture book, in which Feliciana Arballo, on an arduous journey from Mexico to California in 1775, follows her dream of a life without prejudice for her children and descendants.

Maria Feliciana Arballo tightened the knot of her rebozo, the shawl that held one-month-old Estaquia securely against her chest. She lifted her other daughter, four-year-old Tomása, onto the horse’s saddle and climbed up behind her. Feliciana was nervous but confident that she had made the right decision to join the colonization expedition to California. There, she hoped to build a life for herself and her children without the prejudice she experienced in her hometown of Culiacán, Mexico. Because Estaquia and Tomása’s father was not of pure Spanish ancestry, the girls were considered lower-class mestizos, those of mixed Spanish and Indian heritage.

Felciana waited for Captain Juan Bautista de Anza to give the order to start.

Captain Anza’s entire being seemed to point the way forward: his jutting beard, his intent gaze, his long narrow nose. Three Franciscan priests sat next to him on their stomping, snorting horses. One of the priests, Father Pedro Font, had argued against Feliciana joining the expedition. He believed it was improper for a twenty-year-old widow with two young children to travel without a husband, father, or brother. Feliciana was grateful that Captain Anza permitted her to go.

“Everybody mount!” the captain called. “And our journey will begin.”

Feliciana flicked the reins, and the horse, along with the rest of the procession, marched forward. Dust and the smell of manure rose in the air. Cows mooed, bells clanged, children giggled or cried. Vaqueros—Spanish cowboys—trotted around cattle, horses, and pack mules, chasing any strays back into the herd.

Synopsis: The story tells of a little-known part of U.S. history when, in 1775, some of the first Spanish settlers embarked on a colonization expedition from Mexico to California. THE POWER OF A DREAM focuses on Feliciana Arballo, an inspiring, brave, and remarkable woman, especially for the time in which she lived. Her husband died before the expedition began, and, as a young widow, Feliciana made the arduous four-month journey with her daughters: the infant Estaquia and four-year-old Tomása. Her husband, and thus her daughters, were looked down upon as mestizos, those of mixed Spanish and Indian heritage. As many immigrants do today, she followed her dream to have a better life in California for herself and her children, including eight more children she had with her second husband. Feliciana is referenced in the diaries of Captain Juan Bautista de Anza, who led the expedition, and Father Pedro Font, who also went on the journey. The book includes my two author notes: one discusses Feliciana’s background and her descendants, many of whom played important roles in the history of California; the other author note provides a background of the expedition itself. 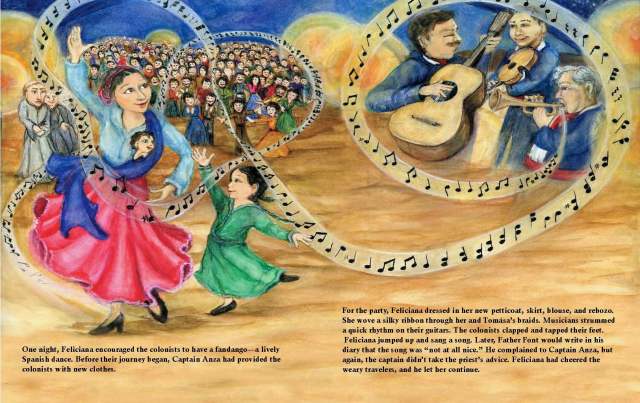 Feliciana loved music and dancing, and she helped distract the colonists from the hardships they faced.

Primary Audience: Children ages 5 – 10 (grades 1-4), as well as parents and teachers who can use the book to teach children about this important part of U.S. and California history and how it relates to today’s issues of race, immigration, heritage, and the value of diversity.

Further reading: Feliciana is a fictionalized character in my award-winning book Yakimali’s Gift, which is a novel about the 1775 expedition and 15-year-old Fernanda, who joins the expedition and finds not only romance, but truths that change the way she sees her family, her ancestry, and herself.