Blogging from A to Z Challenge: U is for Umberto Boccioni 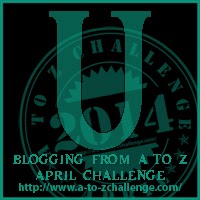 My theme for the Blogging from A to Z challenge is Creativity. As I mentioned in another post, to be creative, one needs to think outside the box. And Italian painter and sculptor Umberto Boccioni did just that. Born in 1882, Boccioni was at the forefront of the revolutionary Futurist movement.

Though the movement was founded in 1909 by F.T. Marinetti, Boccioni was one of the first to incorporate Marinetti’s ideas into the visual arts.

The Futurists were interested in technology, and their work depicted the movement of a modern dynamic urban environment with such subjects as working people, electricity, and speeding trains. The Futurists dreamed of Italy becoming the epitome of a technologically advanced society.

One of Boccioni’s most famous paintings is The City Rises. The painting, almost ten feet wide, shows workers constructing an electric power plant. Not only was the subject matter new for the era, but the style was also ahead of its time with Boccioni’s brushwork and abstract qualities to his painting. 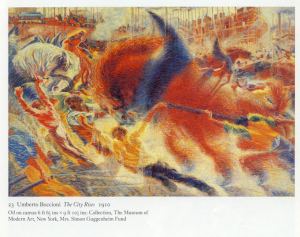 In 1912, Boccioni switched from painting to sculpture, creating what are considered some of the most important sculptures of the Futurist movement. Below, his bronze sculpture Unique Forms of Continuity in Space again shows a style that could have been created by a modern-day sculptor. 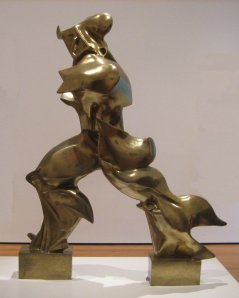 Boccioni tragically died in 1916 at the age of 33 when, after being drafted into the Italian army during WWI, he was trampled by a horse during a training exercise.

“In the brief life span of the Italian Futurist movement, the short-lived Umberto Boccioni was a blazing comet. … Boccioni was a fiery theoretician of the movement, drafting two Futurist manifestoes in 1910 and 1912 that exalted the force and energy of contemporary life.”

For me, Boccioni is another example of an artist who thought outside the box, who was dauntless in his pursuit of his creativity, and who trusted himself completely.

4 Responses to Blogging from A to Z Challenge: U is for Umberto Boccioni