Today, author Susan Lowe joins us to answer 10 Questions about her writing. Susan’s book, Josie: A Story of Faith and Survival, is about her mother’s experience living through not only Hitler’s occupation of Yugoslavia, but also Tito’s killing of ethnic Germans.

Susan Lowe: Linda, I can’t remember a time that I didn’t want to be a writer. As a small child I composed newspapers for the make-believe town that my Barbie lived in. I was frequently so involved in my news stories that there wasn’t time to play with my dolls. As an adult I toyed with the idea of writing, but was so busy going to college, raising a family, and working full-time, that I put the thought on the back burner. Around 1999, I decided to enroll in a writing course at the Institute of Children’s Literature for Writers. Although I enjoyed the course, it wasn’t until 2005 that I became serious about writing a book.

LC: What is your writing process: where do you write, how often do you write, are you a full-time or part-time writer, do you outline or do you plot as you go, etc.?

SL: I have an office in my home, but in addition to being an author, I am a licensed marriage and family therapist, and teach college level psychology courses. Writing requires me to squeeze it in wherever I can. When weather permits, I like to sit on the patio with my dogs and write. Unfortunately, my writing tends to be sporadic, as I struggle with keeping a schedule. Although I believe that outlines can be helpful in the writing process, I rarely use them, preferring to let the characters lead when working on a fiction project, and following the story line in my non-fiction writing endeavors. 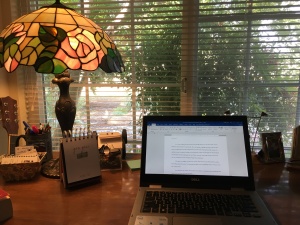 LC: Your book, Josie: A Story of Faith and Survival, is about your mother’s experience in the Yugoslavian concentration camps, post WWII. Why did you decide to write this book?

SL: After my mother’s death, I was thinking about the resilience she showed in her ability to survive some of life’s most challenging circumstances. Josie was born in 1940 Yugoslavia, today that part of the world is known as Serbia. The only life she knew was one filled with the unrest of war. Hitler occupied the country from 1941 to 1944 and shortly after, Marshall Tito became the new dictator. Tito planned the annihilation of all ethnic Germans who had been loyal Yugoslavian citizens for generations. Realizing that my mother was a survivor of Tito’s ethnic cleansing, and knowing it was her faith that helped her survive, I felt prompted to tell her story. Although the book is told through the eyes of one little girl, it is really the story of millions of ethnic Germans in countries like Yugoslavia. More than seventy years after the end of WWII they are still waiting for the world to hear their plight. I felt like it was time to honor their story, so that they might feel heard.

LC: What sort of research did you have to do for the book?

SL: A lot of research went into making sure that, Josie: A Story of Faith and Survival, was historically accurate and not just a collection of family stories. Diane Iverson, Josie’s niece, collaborated with me on researching Tito’s reign over Yugoslavia from 1944-1950. During the process of writing, we had opportunities to meet with survivors and their families who shared horrendous experiences that either they or their loved ones endured. Josie’s brother, Andreas, was still alive at the time of the first draft and provided vivid details from his perspective. The pain most often expressed during interviews was not the repulsive things that they lived through, but the fact that it is rarely acknowledged. Survivors often referred to it as the forgotten history. At one point I had an email exchange with a Serbian man living in the same village where Josie and her family had lived. I was interested in obtaining a vision of what the town looked like so that my descriptions would be consistent with the area. We also vetted the manuscript through Carol Lilly, PhD, Brigitte Neary, PhD, and Alfred de Zayas, JD, PhD, as they are Eastern European historians.

LC: You certainly did your research. It must have been interesting but also very emotional to speak with other survivors.

Is your book written for an adult or children’s audience? Please explain why you chose to target that audience.

SL: It’s actually written for both. Josie tells the story through a child’s eyes; with the text written in language engaging at middle grade through adult audiences. The forward and historical background provide additional history for the more mature reader.

LC: Why did you choose self-publishing over traditional?

SL: Initially, I had planned to publish through traditional means. Unfortunately, there were several very encouraging rejection letters that implied that they didn’t publish my genre. This was confusing as extensive research was done before submitting manuscripts. Eventually someone told me off the record that the world was not ready for a German victim. One publisher did offer a contract, but he didn’t want to pay royalties, only a small one-time payout. Those experiences led to my decision to self-publish through Create Space, as the survivors themselves were aging and I wanted to honor them during their lifetime.

SL: My mother was a single parent and didn’t have money for many extracurricular activities, so if I wanted to be transported to another place it had to be through a book. I read everything that I could get my hands on. During the school year I checked out seven to eight books a week from the school library. During the summer months, a bookmobile visited our neighborhood and my activities revolved around being available to pick up new books. I also begged my mom to make a trip to the County Library on occasional Saturday’s. Fortunately for me, she also loved to read.

SL: I believe knowing what we like to read, makes us better writers. Other authors styles can provide new ideas for storytelling.

SL: It’s difficult to choose favorite authors because I love so many different genres. But to name a few, I love, To Kill a Mockingbird, by Harper Lee, Sweet Thursday, by John Steinbeck, and all of CJ Box’s Joe Picket series. I think that I am typically drawn to any book I read for either exploration of a topic or escape.

LC: Anything new in the works?

SL: Yes, thanks for asking. I have an 8 to 10-year-old picture book, Josie Dreams of Freedom, under contract with Guardian Angel Publishing, it should be out in the next couple of years. My present projects include three different genres: A fictional Middle Grade adventure story of a boy who discovers his step-father’s family has unusual powers; a fictional Young Adult story about a young woman’s endeavor to put her life back together after an attempted rape ends her relationship with her fiancé, who is the perpetrator’s best friend; and a nonfiction book of  a seventeen-year old who draws on her faith to survive a car accident that leaves her paraplegic, and threatens to turn her world upside down.

LC: Bonus question! Do you have anything you’d like to add?

SL: I have had the opportunity to share Josie’s incredible survival story through presentations at County and School Library’s, in classrooms for high school students, Fresno State’s Older Adult Program, Assisted Living Programs, women’s ministries, and book clubs. If you’d like to hear Josie’s story, I would love to share it at your event. (Please see contact info below.) 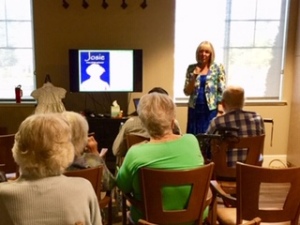 Author Susan Lowe speaking about her book: Jose, A Story of Faith and Survival

LC: Susan, thanks so much for sharing your work with us. Best of luck with your picture book and other writing!

Susan Lowe was born in Fresno, California, a first generation American on her mother’s side. Lowe is a licensed marriage family therapist, with a Master of Science degree in Counseling, and a heart for victims of trauma. Lowe has taught psychology related courses at all college levels. She fell in love with books early on, and soon discovered the magic of reading multiple genres. Each book opened up new worlds to explore. Realizing her mother lived through an often-untold portion of history, Lowe wanted to honor both the living and dead of those horrific events by sharing their story. JOSIE: A Story of Faith and Survival is her first book. Lowe presently lives in Central California with her husband.