Posted on December 5, 2018 by lindacovella

Historical fiction author Richard Alan is here to answer “10 Questions” about his writing. Richard writes novels “about people striving to find their soul-mate; the person they are meant to be with for life.” Two of his novels have recently advanced to semi-finalist in the Chanticleer International Book Awards and Novel Competitions. Please read more about this in Richard’s bio at the end of the interview.

Linda Covella: Richard, so happy to have you here today. And congratulations on your recent accomplishments in the Chanticleer competitions!

Richard Alan: I’ve enjoyed occasional writing since I was young. For a junior high assignment, I wrote a lengthy, four-thousand word short story. It was rejected as the subject, my taking a multi-day cross-country drive included, of all things, a female companion. An angry teacher told me this was inappropriate material for a seventh-grade assignment. The offending documents were sent to my mother, an English major, who chastised me…but later the same day, I overheard her telling my father, “I had no clue he could write…let alone with such an emotive voice.” I also wrote short stories for my children where they were the heroes of some adventure. Shortly before I retired, I wrote a short article for a friend’s blog about my experience in Vietnam. The friend asked how long I had been writing. I replied, “I hadn’t.” She replied, “You should.” A history lover and lifelong learner, I decided, at age sixty-one, after a successful career in software development, to begin a new career as a novelist. After four volumes in the contemporary romance genre, I decided my primary writing effort would be directed toward historical fiction. 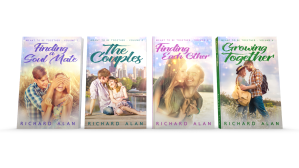 LC: Proof it’s never too late to take up a new career!

What is your writing process: where do you write, how often do you write, are you a full-time or part-time writer, do you outline or do you plot as you go, etc.?

RA: My writing space is a converted bedroom with blank walls, two tall bookshelves, an electric drum set, a corner desk with two computers, an e-reader and a printer. My wife works in her home office twenty-paces away, which I find useful so I can bounce ideas off her fertile imagination. While I’m a full-time author, thirty-percent of that time is used for research on the era my characters will journey through. The only outline I use is the order of history. My characters tell me the plot as I develop them.

LC: Where do you find your inspiration for your stories? Do you draw from your own experiences?

RA: People watching fascinates me. A number of my characters were inspired from people I observed at locations such as street fairs, airports and beaches. Example: On a cool fall day in Nashville, Tennessee, I saw a little boy with a dog at his side, walking along the fence of a, closed for the season, water park. He peered through the fence, sadness in his expression. He sighed. The sounds of laughter, screams, and water splashing, a distant, summer-time memory. This brief observation inspired a short story which began with the above scene.

I certainly draw on my own experience. As a Vietnam War Combat Medic, I could easily empathize with the soldiers and medical personnel of the Civil War as portrayed in my last novel. Also, I travel to historically significant locations such as; Vicksburg, Ms. to see and walk the battle ground, and Tyler, Texas to visit a Civil War prison camp.

LC: Who is one of your favorite characters from your story(ies), one that you enjoyed creating and writing about, and why?

RA: In my first historical novel, I had a problem with one of my characters as he was beginning to appear flawless. I decided an illegitimate daughter would bring his character down to earth. But the more I explored the born-out-of-wedlock daughter in that and the following novel, the more her character grew such that Abbey is the major character in my latest novel A Female Doctor in the Civil War.

LC: Which is one of the semi-finalists in the Chanticleer competitions.

Do you incorporate (or inadvertently find) any of your own personality traits into your characters?

RA: If I do, I carefully consider whether they are going to advance the story. If not, out they come. Characters should be quirky. Everyone has their own daily life, full of vanilla characters. A novel should draw readers out of their own world, into a more exciting, dramatic adventure of the mind. I’m a firm believer every word that appears in my novels should only exist to create an emotional response in my readers.

LC: Do you find your stories are more plot driven or character driven? Please explain.

RA: I’ve never constructed a plot. My characters drive my stories; my imagination finds turns and twists that fit the construct of the history my characters pass through.

RA: Voracious reader of both fiction and non-fiction. My mother read to me constantly then gave me a library card the summer before kindergarten. My father made a child sized book shelf for me. As a second grader, my mother, insisting I need more exercise, regularly ran me out of the house. Caught hell from her, when she discovered I’d run as far as our garage where I’d secretly established a reading corner.

RA: IMHO, this is overrated. It is similar to believing you qualify as a good mechanic if you’ve driven many cars. Reading and writing are substantially different disciplines. Techniques which various authors use may be interesting, but a writer’s imagination should provide his or her own set of tools and methods of implementing a story. Great writing is hard work. Reading is not. There is only one book which should be thoroughly read and understood, for every writer of fiction and non-fiction alike, and that is, “On Writing,” by Sol Stein. It provides all the tools, except imagination, for successful writing.

RA: Elmore Leonard: no one, IMHO, writes better dialog or tells stories with an economy of word choice. Every line he writes, advances the story in a concise, descriptive, and engaging manner. One of my favorite lines, where he introduces a character: “The old man squinted into the distance through steel framed spectacles: a seventy-three-year-old turkey buzzard face beneath a farmer’s straw hat; tight mouth barely moving and a hunk of plug stuck in his sunken cheek.”

Leon Uris: his characters come alive as people we’d like to interact with.

James Michener: a master at combining history, people and places.

Greg Isles: action and tension are thy byline.

Shelby Foote: wrote a three-volume series on the Civil War. A peerless, non-fiction work, which draws the reader in like a great work of fiction. Truly one of the greatest non-fiction writers of my lifetime.

LC: That’s quite a range of authors and books. And what a fantastic description from Elmore Leonard.

Anything new in the works?

RA: Currently writing and researching the fourth novel in my American Journeys series covering the period from the Civil War to roughly 1900. Also writing a few short stories. 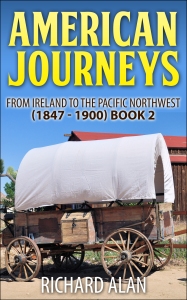 LC: Bonus question! Do you have anything you’d like to add?

RA: I live to write is a cliché but, at seventy-years-old, I look forward to mornings to continue writing. We own a motorhome, which my wife and I both love. One of the major reasons I love our condo-on-wheels, is that it contains a writing space. My wife, a voracious reader in her own right, read seven novels during an eleven-day-trip to Nashville, TN.

LC: Thank you, Richard. I really enjoyed reading your answers and learning more about your writing!

Richard is a 101st Airborne Division Vietnam veteran. After an education in mathematics, 17-years in manufacturing engineering, then 22-years as a software engineer, Richard embarked on a career in writing. His debut series, Meant to Be Together, is a heartwarming, multigenerational family saga about relationships, love and life. It is followed by a series of historical fiction novels, set in 1847 – 1865, about the predecessors to the characters in his Meant to Be Together series. Expertly researched the American Journeys series details the family’s struggles during the Great Irish Famine, emigration from Ireland to Boston, and their journey across the United States. Introduced as a little girl in Volume One of American Journeys, Dr. Abby Kaplan becomes a surgeon during the Civil War.
Being a lifelong learner, Richard loves pursuing the research for his historical fiction. It is frequently accomplished while RV traveling with his wife, Carolynn, to libraries, museums, and historical sites around the country. Having a career that is portable permits traveling to many spectacular areas of the United States. It also provides opportunities to visit our adult children, grandchildren, other relatives, and friends.