Posted on August 7, 2015 by lindacovella

I was out and about today doing errands and stopped by the beach to check out the surf. In yesterday’s blog, I mentioned that we were in a severe drought. Well, last night it poured with lots of thunder and lightning. This never happens in Santa Cruz in the summer. Very strange weather.

This is a cove near our house where we sometimes take Ginger, our dog. It was fairly warm today after the storm last night, and the beach was scattered with sunbathers. And some braved the water, which can be a little chilly on the central coast!

Here I’m looking down at the beach where we can take long walks. In the forefront (and around the corner that you can’t see) are tide pools. This beach is never crowded. Most visitors to Santa Cruz go to the beach near the Boardwalk and the wharf. 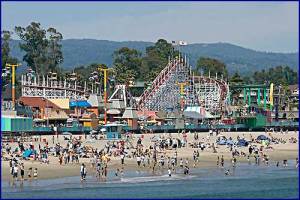 Residents of the wharf. There’s a fenced, square hole in the wharf where you can look down to the pilings below and see the sea lions. They’re able to hop up from the water onto the planks. Sometimes, every spot is taken!

I put a little scene in The Castle Blues Quake where Pepper watches the sea lions, thinking of her friend Chrissy who she had to leave behind in New York City. From such a distance, it’s been difficult to maintain their friendship.  Here’s the excerpt:

At first all I saw were shadows and glints of light on the surging water. Then I made out the shapes of huge sea lions floating in the water or lounging on crossbeams. Even though their bodies were big and blubbery, they had the cutest faces with whiskers on either side of their doggie-type noses.

I wished Chrissie were there. We used to have so much fun at Coney Island. I pulled my cell phone out of my pack and punched in her number.

“I’m at the beach watching some sea lions. You wouldn’t believe how they just hang out here. God, I have so much to tell you. Remember that boy I met? Well there’s this weird guy who plays a saw, and he gave me this harmonica—” I heard giggling in the background. “Can you talk? Are you busy?”

“I’m kind of hanging out with some friends. Maybe I could call you later?”

I stuck my phone back in my pack and gazed down at a sea lion in the water looking up at its buddies. They were crowded onto the crossbeams with no space left for the one in the water. Its angry, hurt bark echoed up to me.

Hey, guy. I thought. I know exactly how you feel.

Have you ever had to move away from a friend, either as a kid or an adult? Were you able to maintain the friendship?

A hub of tomfoolery, tips, and writing

Musings from the Yellow Kitchen

One Stop for All Your Publicity Needs

Looking For The Light